Yay!. EAD for H4 Visa Rule was Approved (published) on Feb 24, 2105. It went into effect on May 26, 2015. But the H4 EAD Lawsuit stayed on. New Rule is proposed in Federal Register to Revoke H4 EAD. You can find the latest H4 EAD Lawsuit and Rule making to remove H4 EAD below.

Remember this : EAD for H4 Visa was published as a Rule not a Law.  Which means, if you are new to this whole process of U.S. Laws, you need to read  Rule Making Process for EAD for H4 Visa.

This effort will help retain talented professionals who are valued by U.S. employers and who seek to contribute to our economy.

I learned additional information about this rule and what to expect next.

Attracting the World’s Best and Brightest: The Department of Homeland Security (DHS) will soon publish several proposed rules that will make the United States more attractive to talented foreign entrepreneurs and other high-skill immigrants who will contribute substantially to the U.S. economy, create jobs, and enhance American innovative competitiveness.  These proposed regulations include rules authorizing employment for spouses of certain high-skill workers on H-1B visas, as well as enhancing opportunities for outstanding professors and researchers. These measures build on continuing DHS efforts to streamline, eliminate inefficiency, and increase the transparency of the existing immigration system, such as by the launch of Entrepreneur Pathways, an online resource center that gives immigrant entrepreneurs an intuitive way to navigate opportunities to start and grow a business in the United States.

Above statement was part of new fact sheet released by White House. Hope this will result in some progress from USCIS on new rule making agenda. We have to wait for exact language from White House or DHS to know who would qualify for “certain” H4 spouse as per April 2014 update.

Previous update us listed below – Status update as of March/9/2013 – Rule Review Extended. In order for the this rule to be implemented, there is a process that DHS, they have to complete review via OMB. This work authorization for H4 rule was received by OMB on Dec/10/2012. Typical Time taken for PMB to review the Rule is 90 days. 90 Days have come and gone. OMB has extended the EAD for H4 visa holders rule review. 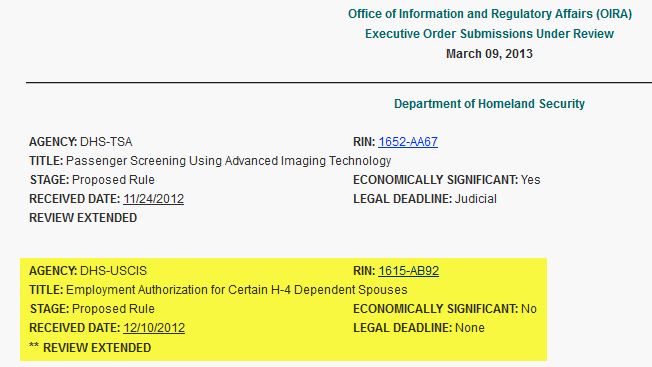 I don’t know how long the extended review will last.

Looks like if the Rule is classified as Economically Significant, then this rule could have been reviewed faster.

Updated ( 2014) : Following section applies to Rule when it was  introduced back in 2013 and 2013 time frame. New proposed rule is improver version of this section.  This section is still here, so you can learn about original proposal. This is part of initiative to Attract And Retain Highly Skilled Immigrants.

This proposed change to the current DHS regulation would allow certain spouses of H-1B visa holders to legally work while their visa holder spouse waits for his or her adjustment of status application to be adjudicated.

At  a minimum, a PERM labor certification or I-140 would have to have been filed, and even approved to qualify for the 3 year H1B extension, if less than 365 days had elapsed since submission.

Who qualifies for EAD for H4? For instance,  a person named John, who is working on H1B in USA for 1 year, gets married. Wife Anita, get H4 visa and comes to USA. Anita (H4 spouse) will not be eligible to get EAD under this new rule right away. In order for Anita to get EAD for H4 Visa, she must wait for John to complete 5 more years in H1B for a total of 6 years.

You can read the latest information about this Work Permit for H4 Visa spouse in this article – 97,000 qualified spouses in H4 can get EAD. In short, following H-4 visa holders will qualify

If you are new to green process, then you can read this article – Green Card Process Steps for  EB2 and EB3 Stay tuned for more updates on this new proposed EAD for H4 visa rules.

We have been waiting for long time for this rule to be implemented right? Questions? Let me know if you have any questions about this Work Permit or about USCIS implementation of this rule.