H4 EAD Rule was proposed back in February 2012. I have tacked each and every update since then to the effective date on May 26, 2015.

I was standing at Observation Desk of Empire State Building when the I-765 form was published by USCIS that had the code for H4 EAD application. Believe it or not, it took exactly 26 minutes (I timed it!) to reach the ground floor from the observation deck, and few minutes of walk to nearby FedEx store to find a PC, so I can post an update about the availability of new I-765 form on the blog.

I was excited about the opportunities H4 EAD will open up for the H4 spouses. It's really painful to write about to about Removal of H4 EAD.

What's Covered In This Article

H4 EAD Revoked or Revised? The Latest Updates from DHS and USCIS

In the earlier version of this article, Removing H4 EAD Rule Making Process, I have listed a similar timeline in a list and possible outcomes. Here in this improved edition, you can get a much better view of the timeline and the process.

DHS request the DC Court of Appeals that "DHS continues to believe that the impending notice of proposed rulemaking (NPRM), which shall propose removing H-4 dependent spouses from the class of aliens eligible for employment authorization, warrants staying this appeal because it would effectively rescind the challenged H-4 Rule.." - DHS Letter to the Court

See Below for analysis and what this means.

DHS request the DC Court of Appeals to Dismiss the Lawsuit. "Save Jobs never established how its members, who work only in the information-technology sector, would clearly or immediately be harmed by the H-4 Rule—which affords employment authorization eligibility across a far broader range of economic sectors". (More details - H4 EAD Lawsuit Updates)

USCIS has completed a proposed regulation to remove H4 EAD. The proposed rule was sent to the White House Office of Management and Budget for review Feb 20, 2019. We are at Step 4 of Rule Making Map listed below. Stay tuned for more updates.

USCIS recently indicated in the Fall Unified Agenda that, a Notice of Proposed Rulemaking in November 2018 (see RIN 1615-AC15) on this regulation.

When DHS Proposes the Rule, it will be Stage 3 in the Map Below.

DHS filed another status report in the case, stating that “[a]s represented to the Court in prior status reports, DHS’s intention to proceed with publication of an NPRM [a new rule] concerning the H-4 visa rule at issue in this case remains unchanged.”

DHS required additional time to assess the H-4 Rule in light of the Executive Order 13,788, Buy American and Hire American  Executive Order. Plans to Publish the Rule in 3 months.

130 BiPartisan House Members sent a letter to DHS Secretary to not to remove the H4 EAD Rule.

The Department of Justice asked for a second pause of 180 days “to permit the Department [of Justice] to re-consider the H-4 Rule and whether the issuance of a notice of proposed rulemaking relating to it [would be] appropriate.”

The Save Jobs appealed the District Court's decision to the U.S. Court of Appeals at the District of Columbia.

The U.S. District Court at the District of Columbia dismissed a lawsuit filed on April 23, 2015 by Save Jobs USA.

April 23, 2015 – New Lawsuit filed to Challenge the Rule in the District Court (by Save Jobs USA)

May 26, 2015 – UCSIS will accept applications for H4 EAD for the first time after a lengthy rulemaking process.

As of Sept 17, 2019 - H4 EAD Rule is still undergoing interagency review and expected to be published in Spring 2020 (could be delayed as well). This is GREAT news for H4 EAD Holders! See Below for the Screenshot of the letter from DHS to the Court. 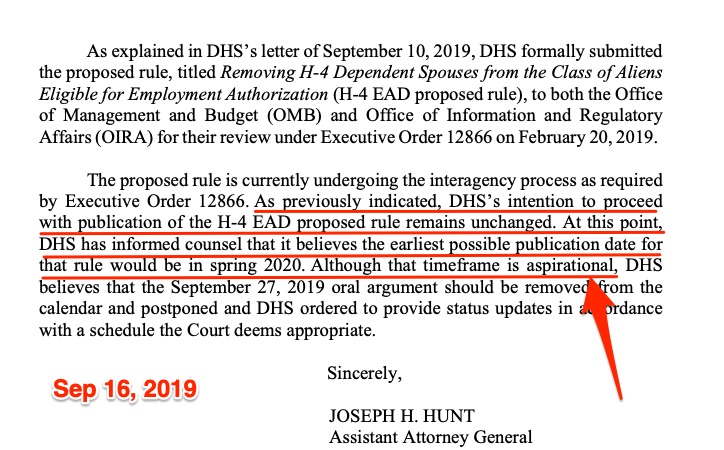 So, the Spring 2020 timeframe to finalize the rule is not set in stone.

If you read the language of the news from USCIS, during Summer of 2017, it looked the H4-EAD Rule might be revised. Possibly to be more restrictive.

But the Notice to Publish a Proposed Rule has the following Abstract:

On February 25, 2015, DHS published a final rule extending eligibility for employment authorization to certain H-4 dependent spouses of H-1B nonimmigrants who are seeking employment-based lawful permanent resident (LPR) status.  DHS is publishing this notice of proposed rulemaking to amend that 2015 final rule.  DHS is proposing to remove from its regulations certain H-4 spouses of H-1B nonimmigrants as a class of aliens eligible for employment authorization.

That sounds like USCUS would completely Remove H4 EAD Work Authorization. Again, this is speculation at this point. And DHS would be also aware of possible Court Challenges from companies, where there is a cost to hire new employees and train them.

When the DACA program was repealed, the work authorization was valid until expiration.

If I were to guess what could happen, then H4 EAD would be valid until the current validity period. I'm speculating here. We don't know the contents of the H4 EAD Rule yet!

H4 EAD is still valid. If you are eligible to apply for H4 EAD as the first-time applicant or H4 EAD Extension, then go ahead and submit your application when the 6-month window opens to apply for H-1B Visa Extension.

In order to understand the Removal of H4 EAD Rule Making Process, take a look at the timeline when H4 EAD Rule was implemented back in 2015.

It was a long 3 Years Process of delays and extensions for the H4 EAD Rule to be implemented.

The way things are looking right now, H4 EAD rule could be revoked in 2019. See below for possible timeline to implement the rule to remove H4 EAD.

Perhaps that's the reasons, I'm seeing a drastic increase in H4 to F1 conversion this year compared to anytime in the past.

There's wide support for keeping the H4 EAD intact from Companies and US Congress Representatives.

It's well documented that life of H4 Visa spouses is difficult, depressing and sad.

For the first time H4 EAD applicants, especially if you have a few gaps in your career, it may be a good idea to study. And I discussed challenges of finding a job on H4 EAD in the following article

And, if your spouse just got I-140 approved, then apply for H4 EAD as soon as possible. On an average, it taking about 1200 days for USCIS to process the EAD application.

Implementing H4 EAD required a lot of advocacy efforts. With several decades waiting time for Green Card via EB2, EB3, life will be really hard if H4 EAD is Revoked. The pain of not having the H4 EAD will be felt deeply only be you and your family. Words can't explain what it means when your career, opportunity, future is taken away from you. Let's hope the advocacy efforts can stop revoking H4 EAD by rule making stalls or drops. 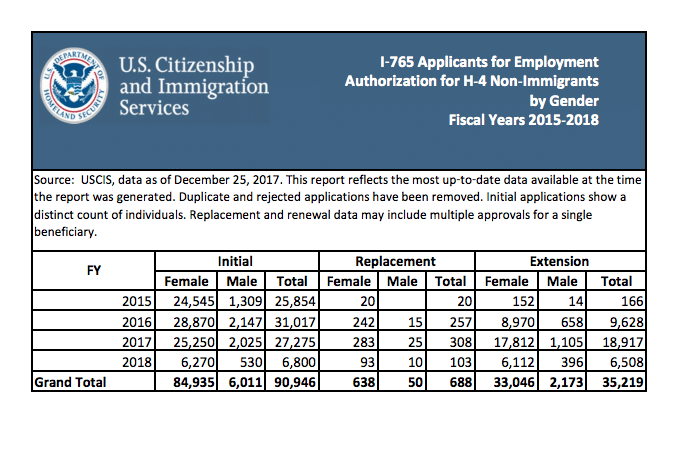