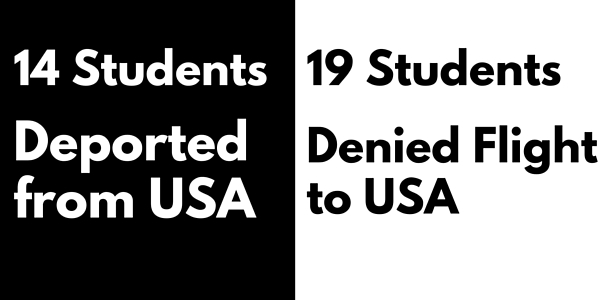 What a drama about Air India denying 19 Indian students traveling to the USA to attend SVU and NPU, since Air India thinks they are blacklisted universities in USA. I wanted to provide clarity and get to the bottom of this news. I’m publishing the scanned copies of withdrawal of application ( I-275) or denied entry form (I-867A) issued to students with names and other personally identifying details redacted.

Some headlines from two major news outlets looked like this

So, here’s my take about

Is NPU and SVU blacklisted?

I don’t know. Unless there’s some announcement (or raid ) by some Federal Agency, I can’t say if NPU or SVU is blacklisted (or under investigation). What do blacklisted universities mean?

Unless there’s some announcement (or raid ) by some Federal Agency, I can’t say if NPU or SVU is blacklisted (or under investigation).

What do blacklisted universities mean?

Denied Entry into Visa at the Port of Entry

After you land in any airport for the first time in the USA, you would have to clear Immigration and Customs. Learn about what happens at U.S. Port of Entry.

You have to know something about the U.S. Visa vs. Port of Entry (Source: What is U.S. Visa).

It clearly states this [highlight]While having a visa does not guarantee entry to the United States, it does indicate a consular officer at a U.S. Embassy or Consulate abroad has determined you are eligible to seek entry for that specific purpose.[/highlight].

When travelers arrive at Port of Entry, if CBP officer has doubt’s about you and purpose of visit, then you could be taken to secondary inspection area for additional questioning.

So far, 14 students who traveled on Air India flights to San Francisco have been deported. Students travel on a one-way ticket to the US and, in the event of deportation, incur huge expenditure to buy a ticket back to India on first available service. Further, seats are often not available on any airlines to travel back. – Air India Statement.

Based on what I have seen, looks like student’s were not prepared to come to the USA.  They weren’t able to answer the questions asked by CBP officer about the university.

The result – Denied entry into U.S.A. Read the questions asked by CBP officer and answeres given by the student. 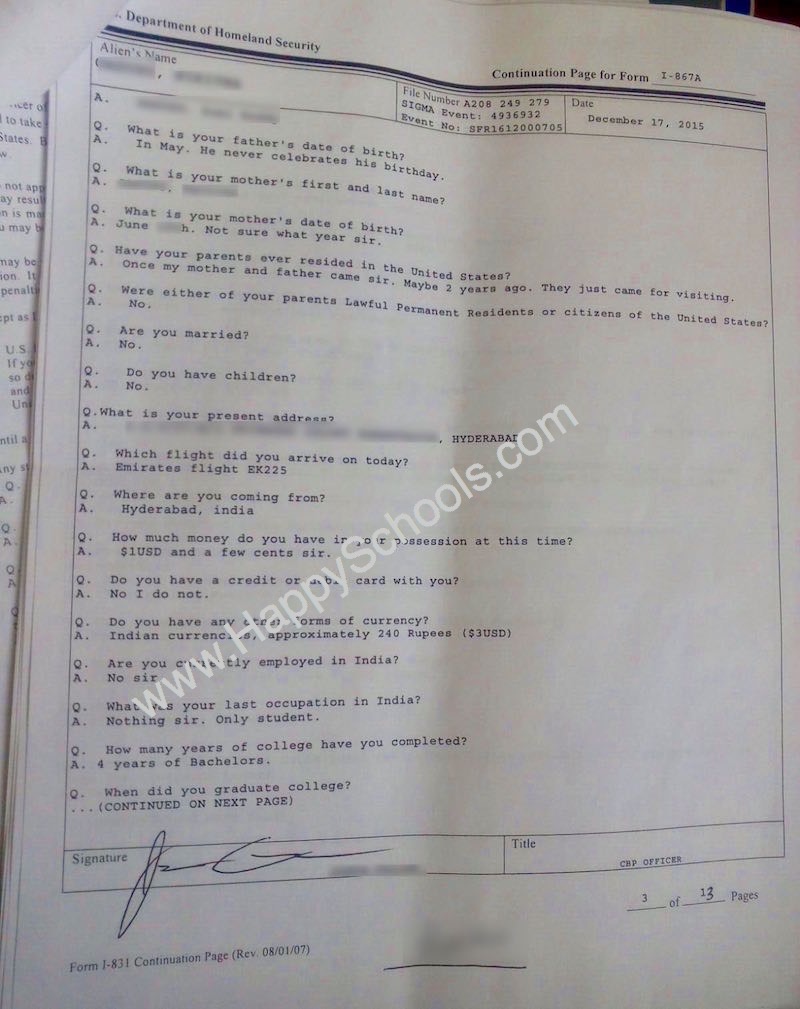 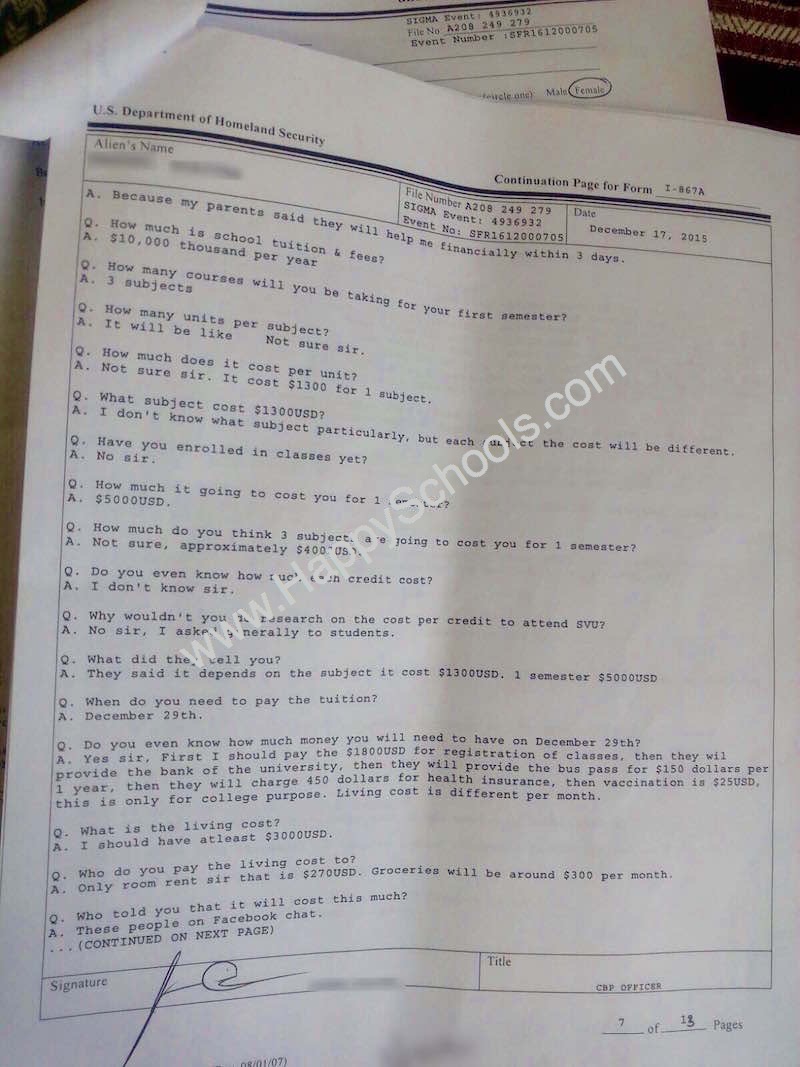 Read the wording of the question in Page 7.

“Do you even know how much money you will need to have on December 29th?”.

Prepare for Port of Entry Interview

There are some questionable universities (or you can call them degree mill). Some students with poor grades and low credentials do get admission and visa to attend such universities.

Also, there are some universities that offer “Day 1 CPT” programs. Students who couldn’t get H1B Visa, attend such universities to stay legally in the USA, which continuing to work using CPT.

I’m not arguing about the pros and cons of such schools. It’s the job of ICE and other agencies to ensure that SEVP certified institutes follow the law of the land.

But, Deportation (or denial of admission into the USA) in the scenario similar to this, I think its 100% student’s fault. So, come prepared while you are entering U.S.A.

We don’t know why 14 students were deported. This student came to the USA in Emirates Airline and was denied entry based on the questions asked and answers. If you read the Q&A, it’s not tough to figure out why this student was denied entry.

If you applied to universities on your efforts, you shouldn’t have to worry. That effort and knowledge should be good enough to answer the questions asked at the port of entry. If you applied via consulting company and had ZERO clue about why you want to study in the USA nor why you applied to some degree mill or low profile university (blacklisted in a generic term) then, you could be in for some trouble.

The following message was posted at NPU’s website home page 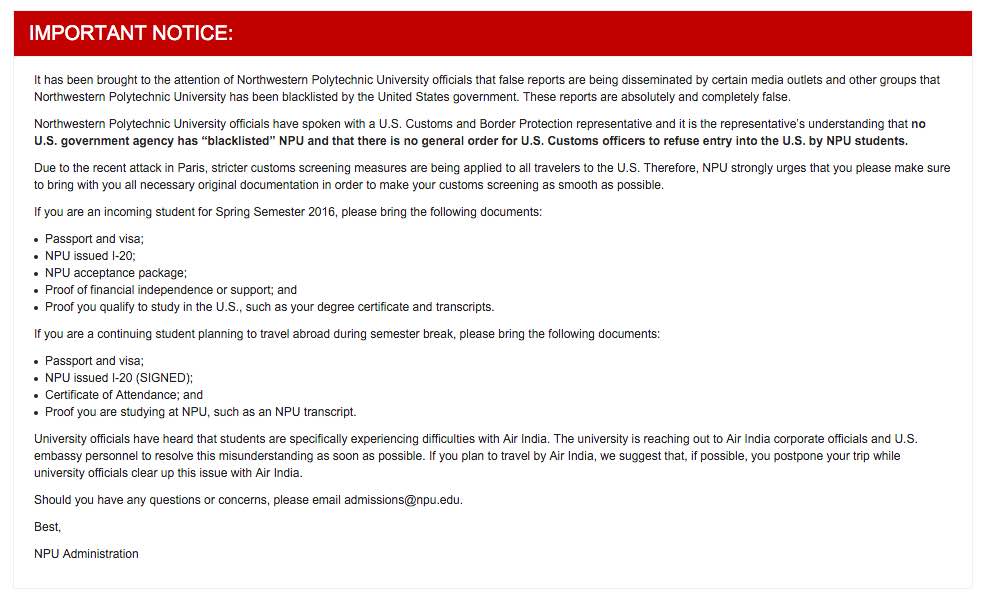 I hope this is not a publicity stunt by Air India to promote their new non-stop Delhi to SFO service.

I’m trying to find and talk to affected students (who were deported or denied by Air India from flying to the USA). If you know anyone, please let me know. I feel sad for those affected students and others. I  want to know more, help others who are following this news and to provide clarity on several unanswered questions.

Should I be worried about flying to the USA for Spring 2016 ( or later)?

No, you shouldn’t be worried. But, come prepared. Know the university. CBP officer could ask you more questions that you would normally expect due to recent attacks.

How to prepare for the new questions at the port of entry?

Speak the truth. It’s easy when you tell the truth and intentions. OIf you are coming to study in a specific university, then you should know the college. What you are

I applied via a consultant, and I don’t know much about the university. What should I do?

I have always said that your journey to study abroad begins not after you come to the USA ( or any country), but right when you start planning to study abroad. You are giving away that opportunity by paying a consultant. If you are a genuine student, you shouldn’t have any problems answering the questions.

Should I go into panic mode?

No, not at all. If you have any questions, please post them below. Don’t change your plans.

Term Deported is different from Withdrawl.  I have used the word “Deported” in this article.

When people are deported it comes with 5 years ban from entering U.S.A. I think some of these students have been given the option to “voluntary withdrawal” and they would allow them to apply for new U.S. Visa and enter U.S.A. again.

I think some of these students have been given the option for “voluntary withdrawal” and they would allow them to apply for new U.S. Visa and enter U.S.A. again.