I had got an admission for MBA in California University of Management and Science (CalUMS), Anaheim, California. I have been to US before on J1 visa for my industrial training of 4 months in 2008.

Now all my 3 attempts of F1 went quite well. But all these 3 times I was given same stupid letter with 214b. I still can’t think of any flaw in my profile and am still trying to analyze what could possibly have gone wrong.Click here to read F1 Visa Experiences posted by over 30 student.

At my 1st attempt, VO asked me general question:

VO: (saw old J1 visa in my passport) why were u in US before?
Me: I had gone for professional training.

VO: a professional training?
Me: yes. It was part of my bachelors degree curriculum.

VO: where did u do it?
Me: Galveston Island, Texas.

VO: in what company?
Me: IHOP @ the san luis resort.

VO: When did u do it?
Me: in 2008. It was when hurricane ike had struck Texas. It was the biggest hurricane in the history of 100 years. So I hv got a unique experience of working during natural calamity.

VO: did u quit it because of hurricane?
Me: no. In fact I worked there as a volunteer during that period.

VO: what did u study and where?
Me: 4 years bachelors degree in HMCT from university of Pune.

VO: What university u r goin for?
Me: California University of mgmt & science, Anaheim, CA.

VO: what course u’ve applied for?
Me: MBA

VO: why CalUMS?
Me: American universities are world renowned for their quality education. I had done my own good research about few universities (told him names of 4-5 universities). But the kind of curriculum CalUMS offers is best suitable for me and it’ll help me make my future plans come true. No other university that I researched about has this kinda curriculum.

VO: but why California?
Me: I told him the universities I had researched about were in Minnesota, Rhode Island, Kentucky and California. But I liked this university more and since it happens 2 b in CA, that’s why I am goin 2 CA.

VO: what are ur future plans?
Me: I wanna start my own bizness in my hometown aftr I come back to India.

VO: what kinda bizness?
Me: I wanna start my restaurant.

VO: Where is ur hometown?
Me: (Name of my town). couple of hours drive from Mumbai.

VO: what do ur parents do?
Me: father is govt servant and mother homemaker.

VO: central or state govt employee?
Me: central govt.
VO: I am sorry but unfortunately u do not qualify for this program. (gave me 214b letter.)

Then I applied 2nd time. VO looked at his screen & said “you came back pretty soon eh?” & asked me same questions and I gave almost same answers. He, too, said that I don’t qualify. So I asked him whats my mistake and where am I goin wrong? He said “no Rohan u hvnt gone wrong anywhere. You are a very very good candidate but u jus don’t qualify 4 this program.(gave me 214b letter) this letter will explain u more.”

Then I applied for 3rd time. VO lady asked me “what circumstances have changed since last time u applied for visa?” I had kept income information of my entire family (father, uncles, aunts, cousins and every1 I could think of. I had listed all assets too. Such as home, plot of land, vehicle and so on) to prove strong home ties. So I said “last time I had presented income proofs of my father only but now I hv income proofs of my entire family.” But that bitch says “2 of my colleagues hv refused ur visa twice. So I cant challenge the decisions of them. So I hv 2 refuse ur visa.” When I asked her “can I reapply?” she said “I don’t recommend to.” Gave me same goddamned 214b letter.
Now I am devastated. My career is ruined. Everythin has gone for a toss. Sometimes thought of reapplying crosses my mind but I hv heard that if US visa is refused thrice, then u’ll never get it again. And frustrating part is 4-5 of my classmates with profile as same as me have got visa for same course in same college. I passed BHMCT with 67.33 % in first class and IELTS with 7 bands.

Two of them hv degree score as well as IELTS score both lower than me. another one has a baby there in US which he had from a girl friend he hooked with when he went to US on J1 visa before. That J1 visa, too, was issued to him in his 3rd attempt. And he got his F1 visa in 2nd attempt now. He passed bachelors with backlogs. IELTS score is 5.5 and eventually has gone there for BBA now. Doesn’t he become potential immigrant as per 214b now? They gave same answers to same questions. But still they got it. So we hv a conclusion here that no1 cares for academic excellence. This is damn random process. If such students can get visa, then why can’t me? I don’t see any flaw in me when I compare my profile with them.

What should I do? I am so frustrated now. Do u really think my interviews didn’t go well? Now I am thinking about MBA in UK. Please guide me.

You worked in restaurant (IHOP) and you mentioned you are interested in starting one after coming back. Probably that could have created the thinking, you might start a restaurant in USA. Why would someone who spend s  fortune to study in USA, come back to start a restaurant?

Above visa experience was shared by Rohan.

First of all, I would like to thank you for all the help that you have rendered me for the past 2 years, starting from preparing for GRE to the visa interview. I and all my fellow US aspirants are highly grateful to you. I am happy to inform you that my visa was approved… 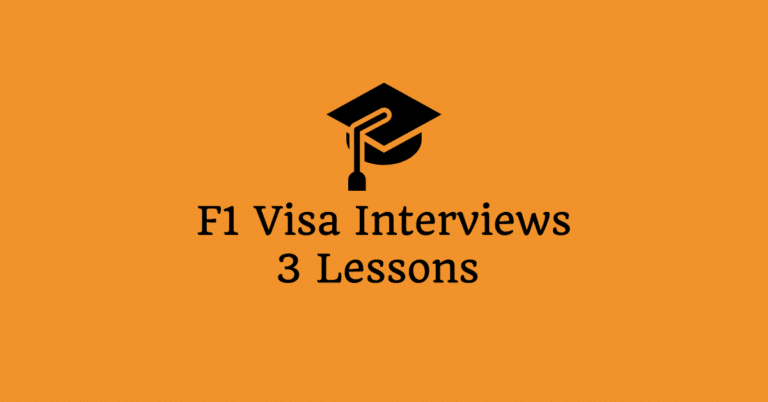 Here’s two undergraduate F-1 Visa Interview Experience as shared by the two students who attended visa interview in recent weeks. And there’s an interesting statement at the end of the second visa experience. The majority of the reader would overlook that, but it contains the key to your F1 Visa approval. Students who submitted the…

F1 Visa Interview – MS in Electrical and Electronics Engineering – University of Colorado Denver – Submitted by Simran. PS : This is how your interview could look if you memorize answers for F1 Visa interview questions. List of F1 Visa Interview Questions Enter Simran: My interview was scheduled at 9 AM I was bit…

Student US Visa interview (sent visa email by Sanju) Firstly thanks to HSB for this wonderfull blog, this was really helpful for me while applying for universities and preparing for the VI.Well my VI was day(14th july). I would like to share my experience with you. After going through the usual security checks and document…

Following F1 visa interview in Mumbai Consulate looks pretty casual. This student is appearing for this 3rd F1 Visa interview after getting rejected twice. Once in Chennai and second time in Hyderabad consulate. The actual twist to this interview is in the last line of  of this experience. I have made the following changes to…