Now we have clarity about the Immigration Suspension. Here’s what President Trump said today during the White House briefing

“I will be issuing a temporary suspension of immigration into the United States. By pausing, we’ll help put unemployed Americans first in line for jobs. It would be wrong to be replacing them with new immigrant labor flown in from abroad.”

Non-Immigrant Visas are Not Impacted, but Section 6 has a catch!

Green Card issued via Consular Processing would be impacted.

The processing of changing from F1 to H1B is done by Change of Status or Consular Processing.

Likewise, folks will adjust from H1B to Green Card by filing the I-485 Application.

But, instead of I-485, Consular Processing is available to get the Green Card.

The majority of such a petition applies to Family-Based Green Card applications.

This 60 days pause applies to such immigrant petitions.

In light of the attack from the Invisible Enemy, as well as the need to protect the jobs of our GREAT American Citizens, I will be signing an Executive Order to temporarily suspend immigration into the United States!

Here is What we know

Temporary workers are not impacted by this 60 days pause.

You know the answers now.

Above category of visa are not impacted as per the President.

Let’s just wait for the final text of the Executive Order to confirm.

Question – When will the Department of State start processing Visa applications?

How we got here?

Here’s what has happened in the past 24 hours since the President Tweeted about Immigration Suspension. 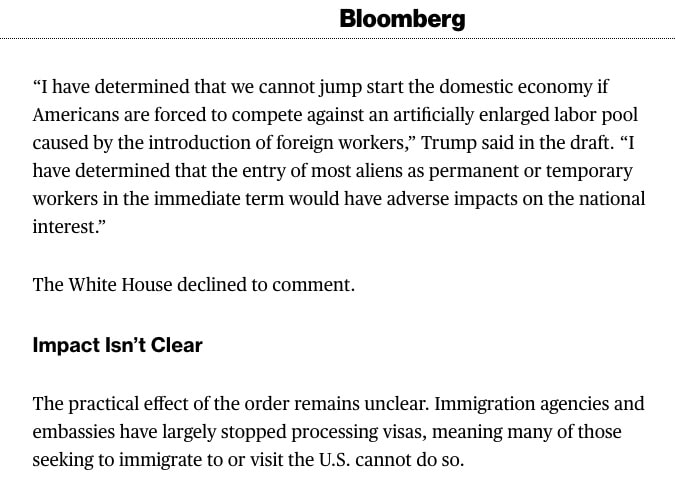 Let’s think about H1B Certifications for a minute.

For Green Card Process, PERM takes like a year!

If there are 500,00- H1B workers and they all have to get Certification for 90 days, it doesn’t sound feasible to be implemented! Unless they are talking of long term H1B stay!

Let’s wait to see more details on this!

Update: Executive Order been under works for a few weeks now

This Executive Order is Real and been Drafted for the past several weeks by the Department of Homeland Security.

This immigration executive order is real and the White House has been working on it for several weeks. It is not a blanket policy and includes exceptions, a source familiar tells @CBSNews’ @PaulaReidCBS. https://t.co/GPk3iAd0Qg

Update: H1B Workers in the USA might not be impacted

As per this tweet, H1B workers in the USA would not be impacted, but those outside the USA could be impacted.

Trump's #immigration executive order may only impact #H1B holders who are overseas. Workers now in US unaffected. This is from sources who have not seen EO. It's not out yet. It might not impact 2021 H1B visa processing, since they aren't issued until Oct. 1.

Update: Work Visas may not be approved

And this is what I found from NYTimes.com

But the president’s late-night announcement on Monday signals his most wide-ranging attempt yet to seal the country off from the rest of the world. A formal order temporarily barring the provision of new green cards and work visas could come as early as the next few days, according to several people familiar with the plan.

Under such an executive order, the Trump administration would no longer approve any applications from foreigners to live and work in the United States for an undetermined period of time, effectively shutting down the legal immigration system in the same way the president has long advocated closing the borders to illegal immigration. It was not immediately clear what legal basis Mr. Trump would claim to justify shutting down most immigration.

As of this writing, all we have is the Tweet from President Trump and a few insider sources leaking information to the press.

But, as you would expect, everyone is worried. 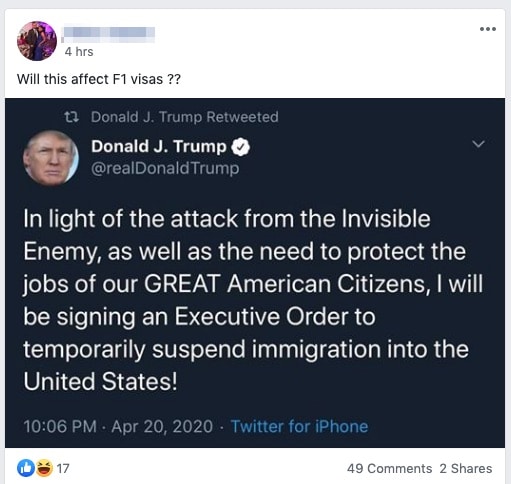 If there’s anyone tell you that you don’t have to worry, I probably will not listen to them.

It’s easy to be on the sidelines and not getting tackled on the field. It hurts only if and when you feel the impact.

But, there are other bigger issues to be considered for F1 Students in school.

What about those graduating this May, August or December 2020?

What about those who already applied for OPT and graduating in May?

As of now, I’m worried about everyone who could be impacted.

Here’s a group of folks talking that H1B and F1 visa are non-immigrant visas and they will not be affected! I hope they are not! 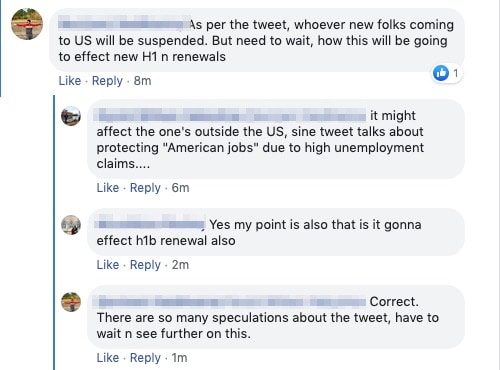 We don’t know when this immigration ban (or suspension) be implemented not what will be the duration of the suspension.

Now, this is much bigger. Saving American Jobs!

Would the US Deport all H1B workers in the USA?

There are concerns about mass deportation for visa workers from the USA.

Here’s what Attorney Jack Sung had to say about this from the Facebook Group thread.

I don’t think there is cause to worry about the EO. If he doesn’t sign it, great. If he signs it, then the court should strike down any provision stopping green card from being issued because USCIS (and DHS) runs on funding that comes from the application fees, and there are many federal workers (USCIS workers, ICE workers, etc) that needs to be fed. Temporarily suspending immigration would hurt more than it helps with the pandemic and job loss. In fact, it will create more job loss. The EO does not have logical connection to helping with pandemic or job loss, so it will not stick. I would expect federal courts to right the wrongs within a few week through an emergency TRO (temporary restraining order) to stop him.

If anything, I think this pandemic will eventually lead to faster processing of immigration applications because of the drastic reduction of applicants caused by the economic downturn. Less applicants means faster processing because caseload will be lighter. However, this would depend on USCIS service centers not fall victim to virus outbreak within it. Let’s hope not. If that doesn’t happen, then I actually think that applications should be processed faster towards later this year.

Another US F1 Visa Rejection experience at US Consulate in Nepal. Visa Interview Date: 19 January Visa Status: Rejected University: Maharishi University of Management I-20: I have to pay only 5000$ from my parent and other through my internship program offered by university. Shows Document: I-20, Transcript, Bank balance certificate (my father account: NRS, 1272000,…

I know you will have lots of questions about this rule. From Fees, to Attorney, Eligibility, I-140, H1B Extension, etc. I’m creating this guide on how to apply for EAD for H4 Visa. Here’s an excerpt from the DHS EAD H4 News Press Release USCIS Director León Rodríguez announced today that, effective May 26, 2015, the…

Last week, all H-1B visa applicants became curious to know the impact of the New H-1B rules that would prevent companies receiving TARP funding to hire H-1B visa workers. It looked like that new H-1B visa rules will be passed to become a law. However, it looks like things took a dramatic turn today behind…

What do you do when your Passport with Valid US Visa stamp is lost while you are in the USA? That’s exactly what happened to a couple of students on F1 Visa while they were studying in the USA. Hi, my room got robbed all my educational certificates, passport, SSN, everything are lost. Can anyone…

As I am always follower of your blog, I need your worthy advice once again. I think if you post this this might help others who are in same situation like my friend. I am writing a visa experience of my best friend. It may sound little absurd. As usually people share their own experience….