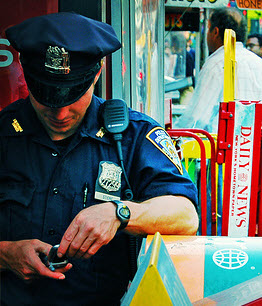 I was in the US on a company trip for about 6 months. I used to bid a lot.. Bidding is a very interesting and addictive stuff. Sites like quibids are genuine.

But there are hell of lot other sites that basically cheat people.

I won a $300 camera for just about $4.50 with free shipping. I was so happy and overjoyed. I let that bidding company to use my credit card for $4.50. It had been more than 2 months, but the product never arrived. I sent repeated emails/calls to the bidding company, all in vain.

Initially I was skeptical to call 911 for a credit card of theft of just $4.50.. I consulted my US manager and he said me go ahead and call 911.. You guys won`t believe, I was calling 911 and before even I could end the call, my hotel manager and a cop were standing at my doorstep.

I was amazed by their quickness and responsiveness. It seems that there are several cops always on the go and if anyone calls 911, they immediately they`l track the caller and send a cop. The cop was in my door step in less than 2 mins after I dialed 911.

He took down a compliant and gave me a case ID number and asked me to submit the case ID to bank.

I went down to the bank and gave my case ID and I refunded $4.50 the very next day.

The bank assumed responsibility for the internet fraud and refunded my money.

Hats off to that credit union. Since that was my first time in the US, I was amazed by quality of service of the bank and cop. In fact, I was feeling guilty that after all for $4.50, I wasted their precious time.

Imagine the same scene in India. Hardly anyone would be bothered saying, its just Rs. 250… Buzz off… I was only feeling pity, how bad the condition is in India. Forget about cops reaching out to us, even ambulance doesn’t reach n proper time in India and because of this many people are daily killed in India.

So, In all, I think if your case genuine like me, calling 911 wouldn’t cost a pie. May be this rule varies from state to state. I am shocked to hear that calling 911 costs $500. But its good for all of us to know both kinds of experience.

Here’s another story that exemplifies survival of the fittest. This person asked not to reveal the identify had multiple backlogs (KT’s Arrear’s ) during his Engineering Degree in India. As you read through this, you can actually feel the emotional roller coaster ride he has been through – joining a degree without interest, backlogs, girl…

I’m just sharing this story and many sticklers just dismissed two years of my life like it never happened. This second edition is continuation of Part 1 – This Indian Student Talks Education, Projects, Girlfriends and Sex. Parent’s Shouldn’t Be Reading This Okay, cool I don’t want to contend with your free speech. Just, don’t…

Life ins USA includes all sort of encounters and events. Some events are so intimate it doesn’t go past few ears. But, this student came out to speak his hearts and some personal details that will make some Indian Parents think twice before sending their kid’s to America for attending college. Following experience was shared…

I am a regular follower of your blog to keep myself informed of the various aspects and factors that one has to know as an aspirant of USA studies. Though very informative and helpful, I think your blog should also include stuff like the safety and weather of the various states in US as it…