Oh My! What’s going on with the President Trump’s Executive Order, Travel Ban and ever growing rumors of H1B Visa Restrictions, minimum salary of $130,000. I know it’s a lot to handle and consume. But, it all comes down to following questions:

How is this President Trump’s Order going to affect Me? Right?

Is there a deadline for H1B Visa bills to be implemented? Read How a Bill Becomes a Law for greater understanding of the process and the American political process.

I got several questions in the past few days:

There are few H1B Visa and Green Card Bills in U.S. House and Senate to reform the H1B Visa. Remember, they are the Bills. They are not yet implemented into Law.

Honestly! I don’t know. I’m not sure anyone can answer that question. Because of what we have seen in the past week with Travel Ban.

But, everyone has an opinion. I’m sure you want my opinion. Sure, why not?

I think H1B Visa changes require a new Law to be passed and it can take some time like few weeks to a few months. Some of the bills were reintroduced from the previous congress. So, they are not new. Here’s how $130k H1b Visa Salary is computed

But, with President Trump’s pace, things may move faster this time around. It will be good to see H1B Visa and Green Card process reformed. I’m sure you would agree. So, what should you do now?
If you think of a story, there’s three parts to it. The Beginning. The Middle Plot. The End Game. Here’s two stories:

These are two parallel stories. The $130k salary story doesn’t have an ending yet. Please don’t combine both the stories and think of “what-if” questions. Engineers are good at that, right?

If and when there’s changes to the Law relating to H1B Visa, you will be definitely hearing from me. Plus, $130,000 as minimum Salary as per Bill  impacts only certain employers. Not everyone.

$130k is for certain employer who meets certain criteria. It’s not all or nothing kind, just like other media have reported it. I’m keeping track of new and recent developments.

Can I travel outside U.S.A during these times?

You probably heard stories about people getting deported in the past few days. There’s few million students on OPT, F1, STEM OPT, H1B, H4 Visa status. There’s always going to be some folks who are being denied entry. But, at these times, those news get’s amplified. If you  have travel plans in the coming days and months, talk to your immigration attorney. They are best suited to give you advice based on your situation. Here’s some members of F1 Visa – STEM OPT Group who has entered the USA in recent days. 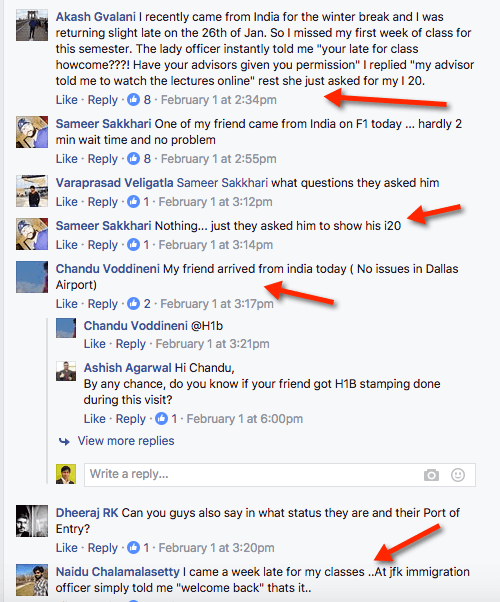 Let me wrap this by saying this  proverb “Where there’s smoke there’s fire”. Stay tuned for more updates. If you know more facts or fake, please add them in the comments below.

Thanks to Chandra for forwarding this screenshot from their University Facebook Group: 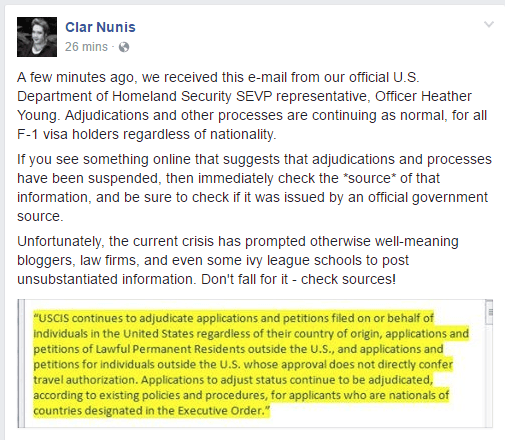