What I wrote yesterday was an extension of the comment I made in the F1 Visa OPT, STEM OPT Facebook Group (While you are visiting the group, click Join the Group, the most active group for F1 Visa Student community).

I did not know the interpretatons of the into details of the new draft memo and it’s impact until I noticed a comment in the Facebook Group.

The comment said, “Day 1 CPT Universities are illegal” by one of the moderators.

I asked the moderator of the group, “Why did you think Day 1 CPT universities are illegal”.

He mentioned that Immigration attorneys are talking about it. And it did not take long before I started noticing the impact of the new draft memo from USCIS  (USCIS Changing Policy on Accrued Unlawful Presence by Nonimmigrant Students and Exchange Visitors).

If you haven’t had a chance to fully understand the memo, please take some time to understand what is in the draft memo and potential impact. The memo goes into effect on Aug 9, 2018.

Here’s an excerpt from the memo about accruing unlawful presence.

Individuals in F, J, or M status who fail to maintain their status on or after Aug. 9, 2018, will start accruing unlawful presence on the earliest of any of the following:

Now, how is this related to Day 1 CPT Universities? There is no mention of such colleges and programs in the memo.

Read the highlighted part in the following sentence again:

If USCIS considers the purpose of CPT issued by the Day 1 CPT Universities as unauthorized, then F1 students will start accruing unlawful presence.

Here’s what the Draft Memo says:

Those subject to the three-year, 10-year, or permanent unlawful presence bars to admission are generally not eligible to apply for a visa, admission, or adjustment of status to permanent residence unless they are eligible for a waiver of inadmissibility or another form of relief.

So, how does this accruing unlawful presence related to Day 1 CPT Universities?

As I stated in the previous article, your immigration checkpoints are at USCIS, Port of Entry and Visa Interview.

DSO issues your I-20 for CPT. Immigration officials from any of the above departments is not involved at this point.

When F1 students are applying for H1B Visa, and at that juncture, if USCIS thinks the CPT from Day 1 college is unauthorized, because of purpose it was used, then you will start accruing unlawful status from the Day the CPT was issued from Aug 9, 2018. This my understanding after watching this video. 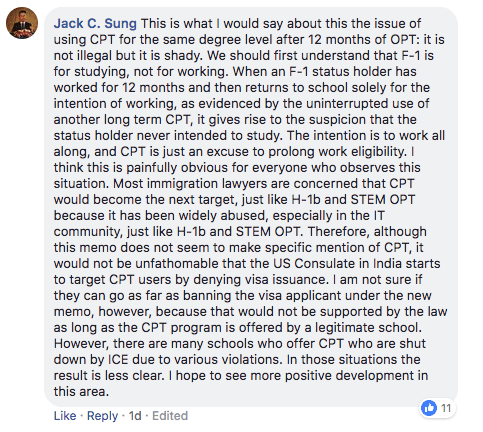 And as most users are expecting to see more concrete data to verify the claims. Here’s a reply from Immigration Attorney Satveer Chaudhary: 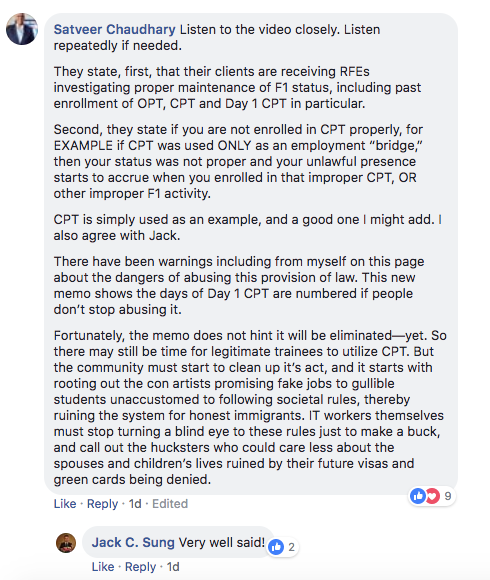 If you are following this article, it’s easy to figure out the reasons.

But now, a new interpretation of the regulations by USCIS suggests that CPT cannot be authorized AT ALL if the student is at the same degree level. This is based on an existing regulation which states:

This has historically been interpreted only to apply to OPT, not CPT. However, the regulation itself just refers to “practical training” and does not specify which types of practical training it applies to.

Now, if this were true, what can possibly happen (and go wrong)?  And there are several questions related to an individual scenario and here’s one from the comment.

If I am taking CPT only for certain period, and leave it to go home country before H1B application, where my company can apply H1B through a consular process (not the change of status). What is the impact?

As per the interpretation of this memo and the impact Day 1 CPT option, USCIS considers the day the CPT was issued to be count as unlawful presence. You may leave the country, for now, what about future opportunities in the USA?

Forget future opportunities and visa stamping. If you knew Day 1 CPT option in second masters is considered to be illegal by USCIS, why would you even consider that?

If you have a specific question about this proposed memo, you can Ask an Immigration Attorney to figure out the impact and make plans. The example discussed here is based on Day 1 CPT colleges and universities. There are several scenarios at play here. For example, if employment started a day before authorized CPT date to unemployment period in OPT and so on.

Next: Life of Long Distance Couple of H1B Visas

Here’s a question from Jyothsna, which in summary asks: Which is better, MIT or IIT Kharagpur? He sent this email: Hi! I have some doubt…Which is valued more, an IIT from Kharagpur or an MS from a top most university in the US? Who will get a job first if graduates from both schools appeared at same… 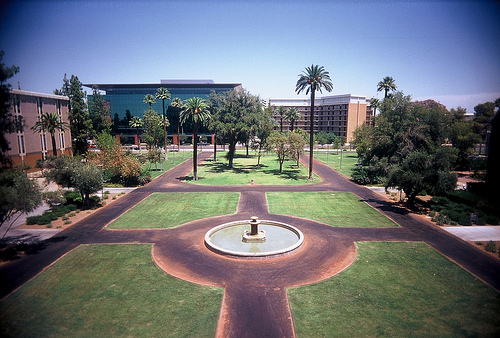 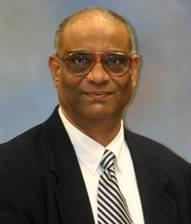 I reached out to Professor Arun Kulkarni at University of Texas at Tyler to answer few questions about Computer Science Department. Dr. Arun Kulkarni, Professor of Computer Science, has been with The University of Texas at Tyler since 1986. His areas of interest include soft computing, database systems, data mining, artificial intelligence, computer vision, image…

Hardeep is doing his master’s studies at Keck Graduate Institute. He’s a frequent Happy Schools Blog reader. He was kind enough to share some of his time between his busy schedule to answer questions related to biotechnology and give his views on the current biotech industry in the U.S. in the current recession. Recently, there…