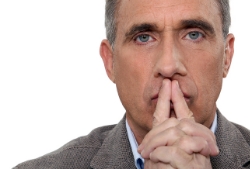 Instead of sharing the typical questions and answers asked during the interview, Cynthia expressed her views about the interview, her thought process and assumptions made by her and about the USA visa officer.

I arrived at the US Embassy in Accra for my appointment at around 7:00 AM, and by 7:30 we were all inside. It was unsettling to see the way they were just lining people up and rejecting them left and right.

A man was even trying to avoid a particular Consular Officer, going to the bathroom quickly when his turn came up, and then trying to change his place in line by asking the person behind him. He was denied. Almost everyone in line was denied. Eventually it was my turn.

After asking for my SEVIS receipt and my I-20, they asked me a series of predictable questions, including a question about why I chose my University, who was going to pay for it, and so on.

The interview was casual, the Consular Officer was even nice.

I smiled, greeted, looked straight into his eyes, and spoke clearly and confidently.

Then he calmly handed me a 214(b) form and asked me to place my finger on the biometric scanner. Rejected.

I don’t want to share the details of the questions I was asked per se, because it was nothing special and many other people on this blog have already shared their interview experiences. It was helpful to read Happy Schools Blog, but the way my interview was conducted, I felt that I was ill-prepared. I want to share the reason why, because I think it will be helpful to some as a slightly different opinion on this process…

First off, I attempted to get a tourist visa to the US last December and was rejected after a 30-second interview where nothing of substance was asked at all — my name, my job, my monthly salary, DONE! Rejected.

All of that information is on the DS-160 already.

I’m convinced they have quotas and simply reject people arbitrarily until the 10th, 12th, or 20th person comes along. But all that aside, I had a record of being rejected for a non-immigrant visa when I applied for my student visa.

Please, does anyone know if you are simply damned forever if you have been rejected in the past? How badly do previous rejections affect you?

Moving on, I want to point out certain suspect questions the Consular Officer asked. Very casually, he asked my age.

Following the advice I read on this blog, I simply stated my age, 31. (I should have said hey my birthday is on the I-20, do the math, funny man!)

Then he asked my family situation, specifically where my parents were. I told him directly, my mother is very old and my father is dead. I had no reason to suspect these questions of having any underhanded intention, so I was just honest.

Then when he rejected me I questioned the Consular Officer, saying I don’t understand what you are looking for? I had all of my documents!

He said I was too old to begin my first degree at 31, and said that I had no family ties keeping me in Ghana because of what I had stated about my parents. But once he hands you the 214(b) form, you’re already done for! You don’t get a chance after that.

So I had no idea that I was digging my own grave, and that is a tactic that I want to warn people about.

Meanwhile they are judging you negatively and drawing conclusions, as they say, “not found in evidence.”

Since when is being too old a reason to deny a student visa? Why should my parents’ relationship to me determine my chances of getting a student visa?

I think the way to approach the F-1 student visa is to answer the questions as they are asked of you, but don’t lose any opportunity to tell your story.

Add any and all information you have prepared that will help your case! I

People should anticipate how the Consular Officer is going to use their answers against them, and try to preemptively address those concerns.

If they cut you off, fine. Move on. But don’t let them reject you like a sitting duck, all the while you are standing there thinking it’s going well.

US Immigration law ALREADY ASSUMES you are a liar when you apply!

Be nice and smile, but don’t let them pull the wool over your eyes.

Tell your story, early and often!

All the same, I’d like to hear others’ feedback on this… My next interview is in a week. I’m going to change all of my answers, obviously. Anyone know if people have better chances going for interviews 2 or 3 times?

Here is my comments to your experience

Lets see what others have to say about your interview.

I would like to share my experience of f1 visa. gre-1100 toel-102 aggri-69 My interview started at 9 am and it went on like this… F1 Visa Rejection – High TOEFL Score me:hi sir gud mrng vo:gud mrng vo:what is specal about your univ me:i told him about my univ vo:what is your ug percentage… 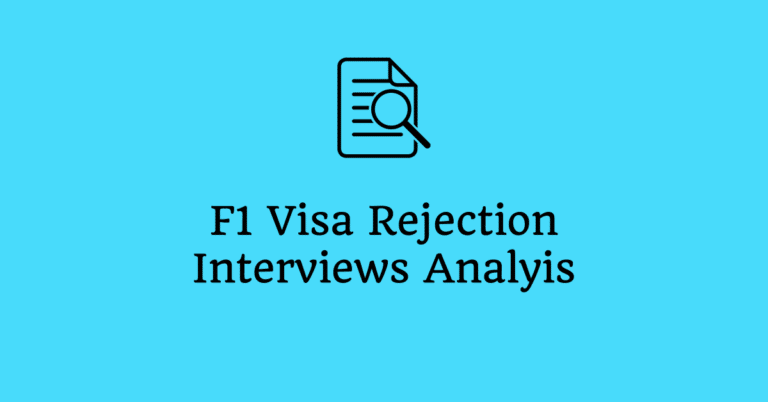 > Following Uncut version of F1 Visa interview was shared by Avinash. July the 24th – After traveling a day earlier from Bangalore and staying over a childhood friend’s place and managing to curb the urge of having drinks with him and indulge in the old times, I woke up at 5 O clock in…