Who in right frame of mind can say that if you are Fat (over weight) don’t apply for PhD program? Well, actually its was by a Professor. Shocking isn’t? 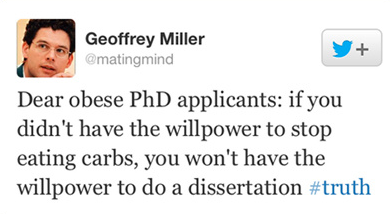 You cannot discriminate or admit students based on their weight. Ridiculous right?

This professor is working for  two universities.

University of New Mexico and visiting professor at NYU.

The Uni­ver­sity of New Mex­ico admin­is­tra­tion and fac­ulty were sur­prised by Dr. Geof­frey Miller’s tweet. We are deeply con­cerned about the impact of the state­ment, which in no way reflects the poli­cies or admis­sion stan­dards of UNM. We are inves­ti­gat­ing every aspect of this inci­dent and will take appro­pri­ate action.

When UNM’s Depart­ment chair learned of the tweet, she con­tacted Pro­fes­sor Miller, who is cur­rently on unpaid leave from UNM while at NYU.  He told her that his com­ment on Twit­ter was part of a research project. We are look­ing into the valid­ity of this asser­tion, and will take appro­pri­ate mea­sures. As mem­bers of the UNM com­mu­nity, we are all respon­si­ble for demon­strat­ing good judg­ment when using social media or other com­mu­ni­ca­tions vehicles.

But, this rule typically doesn’t apply for Airlines.  I’m sure you must have read news about passengers being booted off the flight for being obese and flying with one seat ticket.

Stay tuned for some real Big News in next couple of days. It’s been a long journey with Happy Schools Blog dating back from July of 2007. You may have noticed there’s not a lot of updates in the blog recently. And, all good things have to come to an end. Thanks for all your…

Article by Ashish Arora. I have been reading your blog since long and I am pretty amazed with the fact that you have so much time to maintain a blog being an international student yourself, maybe, I am assuming that you are still a student but this is highly appreciable because I being international student…

On July 23, 2007, Happy Schools Blog was first launched under the url — happyschools.blogspot.com. Today, we are celebrating a very successful and fruitful 2 years of blogging and helping international students and graduates and we’re looking forward to a more promising 3rd year. Blogging and Internet experts know that the usual life span of… 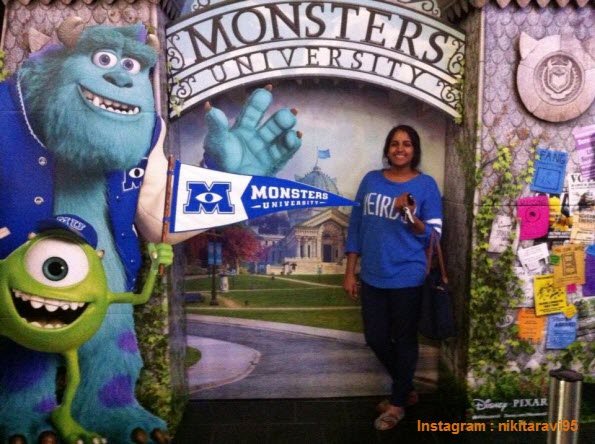 ACICS Accreditation has been in the news for a while now. On Dec 12, 2016 Department of Education confirmed the Loss of ACICS Accreditation. So, how is this loss of Accreditation going to impact International Students here in the U.S.A.? I interviewed Immigration Attorney Murali Bashyam about the impact. You can access the Interview using the link…

I can give another comparison for schools rankings and its important to attend better and top ranked schools for your profile. While in Under Grad, we had a our first semester course on C++ programming language. I believe that was in second year of engineering. As per university syllabus, book we had to follow was…