We often hear students attending F1 Visa multiple times after rejections. You will be amazed to see 6 to 7 F1 Visa rejections in a span of 6 months.

Most of the applicants don’t realize that they have to make major changes to their profile. If the student’s academic profile is weak with low scores and backlogs, they would have to overcome such weakness. Many are unwilling to spend the time to make those changes and unwilling to move-on with their life. There’s no point in trying for visa without any changes to the profile.

Among such students, we tend to see student’s who move-on with their life and try to study in the USA when the chance permits. Today’s story is one such example – A 3 Year Journey.

My Son’s Journey to USA

Dear all, I have been reading all of the posts from Happy Schools and the comments for the last 2 years.

Mostly about F1 Visa interviews. Some of the comments and blogs are informative and some just want to share their desperation with others who are in the same boat.

My son is a graduate of IIT Mumbai (2010 batch). In march 2010 he had confirmed admission to the Masters in 3 Universities in the USA. We decided on the Purdue University as our first choice and asked for the necessary documents from the International student office.

The I-20 was delivered in Mid-May. He enthusiastically filed for his F1 visa at end May and got an interview date. Now comes the hiccup, he was put in administrative processing 221(g).

We waited and waited no response came except a very polite statement saying that the procedure can take up to 6 months so ask for admission deferment with your university.

My son got the deferred date till Spring. We had never heard of anyone being held up for so long and he started applying to UK and other European Universities.

In October, he got offered a Masters by Research MSR at Cranfield University. He asked for his passport back from the U.S. Consulate and applied for the UK visa.

There he joined in Jan of the following year and completed his degree 12 months (Next Janurayr). Meanwhile, we had received a refusal from US embassy in Feb 2011 under section 212(g). That’s after 9 months.

I am saying all this because, I want all of you kids to keep options open. Do not get stuck on USA and get depressed.

While he was doing his Masters in the UK, my son published 2 research papers in the International Journals. He also applied for PhD in various US universities again. He was offered full tuition fee waiver with Fellowship from 2 universities in April 2012. Around this time he was on a post study, work visa in the UK.

He got a job with a multinational company as Software developer and started working there in May 2012. He now applied for US visa from UK after getting I-20 in July 2012.

Now the visa issue raised its head again. He was interviewed twice for 40 minutes each on the same day. His documents checked, rechecked and again put under Administrative processing!

F1 Visa did not come for Fall semester.

He asked for another I-20 for Spring semester. New I-20 was submitted in early November with the new Itinerary and we waited. No reply and no updates.

My son then decided this visa is never going to come and traveled to India for Christmas holidays. On 5th Jan he just checked his F1 visa status by chance and lord and behold. Send Passport was written on 3rd of January.

Now this guy is in Delhi and passport needs to go to London. He flew out of India immediately and couriered his passport to the US embassy on 8th.

With great pleasure I want to share with you all that he has received his passport with F1 visa today and later he will be flying to the US.

I am writing so as to reassure one and all that administrative processing does occur. I had started thinking that it was just an easier way to say NO to visa. Please do not say things like I want to die as my visa got rejected twice (F1 Rejected Twice –  I’vet No Options Other Than To Die). That shook me up.

As a parent, we want the best for our kids, but not at the cost of their mental or physical health. Also remember a refusal is not the end of the world. My son is a better and more mature person now. Every setback can also be a learning experience!

Enjoy the ride and there are many destinations in life.  God Bless you All.

I am a regular HSB reader and following each and every post, VI experiences, suggestions, most of the comments, etc. I have applied to 6 schools (MIS) in total – Univ of Arkansas Fayette ville, Georgia St. Univ, Oklahoma Univ, Utah St. Univ, Univ of Texas at Dallas, Univ of Nebraska at Omaha. Out of…

Re-posting an email reeived about OPT Employment reporting. Students should know the importance of reporting the employment details to your school DSO while on OPT. // As my initial OPT completes on May 2013 I applied for 17 months OPT EXTENSION and mailed the reporting details to my school as change in my employer. And…

I would like to share my whole Student visa experience to America till now with Happy Schools. I would like to thank HSB for every way this blog helped me. Firs thing about VISA interview. I reached there at 7.30 AM, but my appointment was of 9.00. I stood outside waiting for the call of… 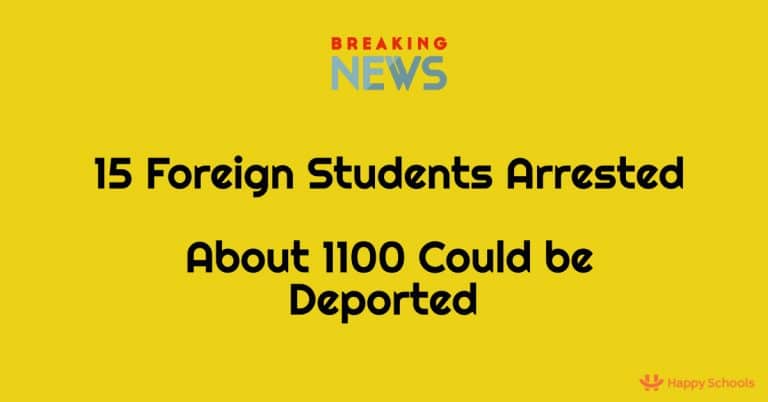 Immigration and Customs Enforcement announced today that they had arrested 15 Foreign Students for OPT-related fraud due to Operation OPTical Illusion. Quick Summary About ICE Arrests Phase 1 of the Ongoing Operation resulted in 15 arrests. These students claimed to be employed in Companies that did not exist (or fake companies) One Company was Identified…