Following experience  was shared by Abhilash. 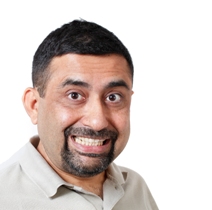 I had an interesting encounter, when I was traveling on an overnight train in India, during my last India trip.

I noticed an old man sitting opposite to me and he was getting phone calls very often.

I was thinking he might be a business man or sales guy. But when I happen to hear about some of the circuit terminologies and components such as resistors and capacitors, that caught my attention.

We happened to start talking for some reason and the conversation started pretty well.

I just wanted to mention: He was traveling alone and I was with my parents.

Even-though I don’t remember all the topics we touched up on nor the exact order of the conversation, I wanted to provide a gist of that conversation.

To begin with, we was very happy to see a son traveling with parents and how the interactions were going on within the family. Since I am an Engineer and my dad used to be a retired Engineer as well, we started to discuss some of the ideas which could be beneficial during new house constructions/Interiors.

This old man, was just listening to us and always had a smile on his face. He started a conversation by asking

“So you are discussing a house/ interior design” , that’s really nice. It’s nice to see a son and parents travelling together and having a discussion on something”

We said “Thank you sir” and my dad and him were busy with a conversation discussing how much work it is, to build a new house, work , workers, money and so many other details.

Then my dad introduced me to him, and then that was the time when he got to know that I did my MS in US and then currently working in United States.

He kinda changed since then. His tone and facial expression was different.

He started by saying…

“I was so happy to see you all together, it is so nice to see a family conversation and I was happy that a son is still with his parents but looks like you are similar to any other youngster” .

Just to mention, I have amazing respect for grads from top schools, and more respect for the professors from those kind of schools.

So I decided, lets hear him and I am going to answer only if i was asked a question and a answer is expected.

He started asking me, give me some good reasons why you would want to work in US and not in India.

Do you think, driving at 65 to 85 miles per hour miles/hour makes it attractive for you?

I starting talking to myself…

Sir… I don’t even have a car for God sake ! ! and if speed of driving was one of the reasons, i may have become a race car driver !!).

Then he continued, or it might be MONEY ! ! !… he went on to say … US is very good at fooling people by showing them money and make people work with their money power. I was like resisting myself , but I could not and spoke up.

That could be one of reasons …. I said …its not easy to get enough money and at the same time have some value for life and being treated as People and not like a dog. If US is making me work, they pay me money for it and I am kind of happy.

He was like. See.. youngsters are always behind money, if you show them a 5 figure number of dollars they are happy.

I went on to say “Money is just one aspect and there are many other aspects like quality of life, having a life by itself, for many people, Work life balance. For more important reasons like work profile by itself.

He said… Its all MONEY MONEY and MONEY nothing else.

I had to interrupt and say

Even-though MONEY could be a BIG reason, we work hard for earning, its not like we are doing nothing and getting free money.

He started saying. Speaking about money,  he was asking how much money a graduate would make?

I said, “it depends on work profile and location and amount of experience.”

He asked me give a number.

But then I said, how many people in India could get in to IISc, IIT and IIMs or become Entrepreneurs?

He started saying,”you don’t need to be from IIT background to be so successful, it’s all about how much will power you have within you to contribute to your country.

I said, OKAY all that sounds very good but not practical for everyone.

Also, the guy has more than 30 yrs of experience as a professor at IIT and he runs his own company now, it took him so much time to get to this state.

He was never admitting it.

Then he started talking about the how IIT’s have become so degraded now.

He was saying, “IIT’s are not the premier univ anymore. Students from IITs jsut look for a bigger number in the package and get out of the country when they graduate. Hardly few students pay attention in the class. Many of them will be coming in late , won’t show up or doing other activities and pay no attention to the lectures”

I must say, I was Surprised to hear this.

Then came in the typical Indian mentality…… LOL…. .

I asked him, you said you make so much money, How much do you pay your Engineers, especially considering the fact that you have small amount of a talented youngsters?

He was like, “I agree, I don’t pay them much …. But the company turnover is SOOO MUCHHH.

After all this great philosophies, he finally admitted that,  not every worker in India can make enough money.

But he twisted the same to say that when you are young , you should not worry about money, work hard for so many years and then think about starting some new ventures and making money.

So many questions raised in my mind after that train journey.

I was of the thinking that…the only reason I would work in India, is to be closer to my parents, friends,  relatives. But in this modern world when nuclear families exist and we hardly get to visit our parents twice or thrice an year. Especially if you belong to any place other than Bangalore, Mumbai, Chennai, Pune or Hyderabad … I think it really doesn’t matter if you live in India or outside India.

I know many people in USA, who are able to get their parents every year for up to 6 months to stay with them (which is better number than visiting them 3 times when you are working India).

I think i am not doing anything wrong.

I think it would be a stupidity to leave an opportunity in US and go to India for working.

Rather than that, I think as long as possible I can work here and if I had to go back, I could always after getting as much experience as possible.

Yes, I do miss my family, but I’m pretty confident of making once an year trip to India to spend few dedicated weeks for them (which /I have been already doing).

I can definitely think of getting them here every year (if possible, and have them stay with me, which I am pretty sure many of them are already doing).

I just wanted to share this experience with you all and wanted to know your thoughts on all of these.

P.S: The Professor’s son was actually working and settled some where in USA. So looks like he was showing all the frustrations that he had on his son, on me.

One of the common trend among the comments posted for the article I got Admit; What Next is the impact of school’s reputation in job search. Most of the students are still finding tough to make decision. You need to have the facts, do apple to apple comparison and select the university. If you don’t…

Lets start this second part about Truth About US Admission Consultancy (agents) with couple of comments posted in the blog Comment 1: Though this kinda seems like an anti-consultant blog, here is some info about us – www.123.com (site removed) Recruiting students as an overseas consultants for the last 20 years. Regarding your original question,…

My Sucess Story – Job Offer as Radio Jockey in USA shared by Kiranmayee Dear HSB, Its nearly been an year I have been following your posts and you simply rock. Today, I would like to share my experience on success with you. I have completed my schooling living abroad as an NRI and was…

Guest post  by Apoorva – Unconventional- career path and choice of University I couldn’t have been happier today with my choice of course and university in the U.S. I did my undergrad in Environmental Sciences from Pune and am now doing my Master’s in Environmental Journalism [the actual name of the course is much longer]….