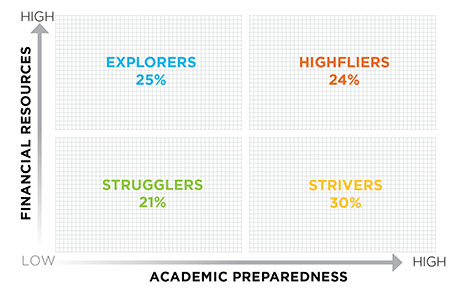 Before you read the rest of the article, answer this question.

Do you think students who use admission agents to admission in USA are academically unprepared?

Now, you have an answer set in your mind, lets look at findings from a recent research report published by WES. Researchers at WES surveyed over 1,600 prospective international students from 115 countries, from October 2011 through March 2012. So, whats the outcome of the survey?

Not All International Students Are the Same

Information on English proficiency and other criteria was used to categorize high or low levels of academic preparedness.

Students with high and low financial resources were identified based on expected institutional financial aid to be available to them.

Then based on the survey data, U.S.-bound international students  were assigned to one of following 4 segments.

Report discuses about ways students get information about U.S. Schools. Here is an interesting section of the report – Use of Agents to get admission in USA.

As you can see, students who are using agents fall under Strugglers category.

Several folks reading HSB should be using agents to apply for college admission in USA.

Do you agree that you are Academically under prepared?

In general even if you are not using agents, what do you think about this research report? Which segment do you fall under?

I’ll say, approaching the agents is an attempt to “prepare” oneself. And, when thousands of dollars are meant to invest, its a natural bent to seek help considering the potential risks. – Shweta Jeevan

According to above report, only 16% of applicants used agents. When so many others students can get admission, visa successfully without agents and they do spend lot money and taking the same risk. So, the question  is why do you think that 16% are not willing to take that risk? What are they feeling insecure about this admission process?

Series of Articles About Admission Agents:

Top 100 Engineering Universities in The World based on Academic Rankings of World Universities. Rankings includes Engineering and Computer Science. Sometimes, rankings of Universities doesn’t make  lot of sense due to the methodology based on Survey. When rankings are based on facts and numbers, you can give more importance. PS: Rankings give a way to…

Fall 2011 students are getting ready to travel to US. Classes should start by  End or August or early September. I wanted to give a quick overview about laptops,  reviews, how much to spend.  Some of you might already have a laptop decided to bring it with you. Please, don’t order a laptop while you…

My name is Mayur, I wanted to some guidance about pursuing MS in Computer Science from top university located in USA or any other county which offers best education. Now why I want to pursue the MS in CS or IT? I am very passionate about learning things that can help me to explore my…

Alright..here comes a counter argument from Suri to Rashmi’s comment To understand the following post, you have to read the above comment posted by Rashmi. ***** Madam, will you come to reality? To be more clear I will stick to %s throughout. The things you say about freedom and responsibility are too bookish and ideal….

Applications from International students for Graduate Schools in US increased 11% this year. Survey was published by Council of Graduate Schools. 11% increase in application is the the largest percentage increase since 2006. Last year the gain was 3% and the year before there was a 1% drop. The highest increase in number of admitted…