Yes, you read it right. U.S. Federal Government is Shuts down from October 1, 2013.  Last time there was shut down, it lasted for 21 days (17 years ago). First Big Question : How can a  government be shut down and why? Watch this video and you will understand who’s behind the shutdown and why?

Who’s to Blame for US Government Shut down? According to The Guardian : There is one party that is solely to blame for the first government shutdown in 17 years. And it’s the Republican party.

New York Times  : A flurry of last-minute moves by the House, Senate and White House late Monday failed to break a bitter budget standoff over President Obama’s health care law, setting in motion the first government shutdown in nearly two decades.The impasse meant that 800,000 federal workers were to be furloughed and more than a million others would be asked to work without pay.

CNN : The game of chicken failed. Neither side blinked. Now millions will pay the price. Americans watched a colossal failure by Congress overnight and the shutdown of their government. For weeks, the House and the Senate blamed and bickered, each claiming they’re standing up for what the public wants. In the end, it led to the one outcome nobody wanted — one that will stop 800,000 Americans from getting paid and could cost the economy about $1 billion a week.

Answers to above questions in next blog post – This is how U.S. Government Shutdown Affects F1 and H1B Visa Holders.

There are 2 major issues causing this shut down – Deb Ceiling (soon it will be crisis) and Obama Care Law. You may already know about U.S. Government Shut Down since yesterday.  Today is Day 2 of the Shut Down and No solution is in sight. While political drama is played in Washington D.C. people who are affected are folks like you and me.

Majority of the readers of this blog are USA Visa Holders  like Student F1 Visa, H1B Visa, H4 Visa, L1, and L2 Visa and prospective students planning to study in USA in coming months and years. This is how U.S. Government Shutdown Affects F1 and H1B Visa Holders. Today, I want to specifically answer some of the questions posted by the readers in the comments yesterday.

Questions were related to H1B Transfer, LCA applications, OPT Students and impact on students planning to study in USA in Spring 2014 or Fall 2014 and later. 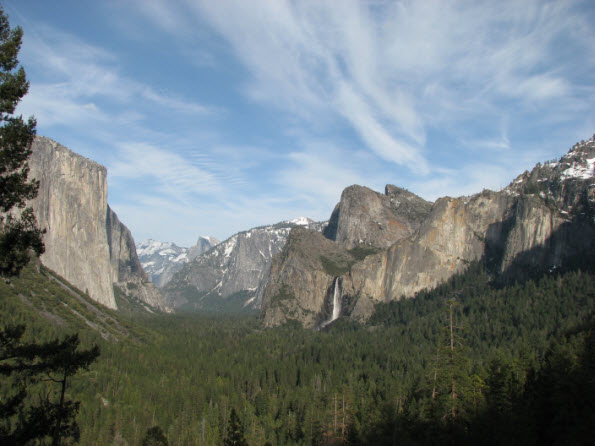 I took the above pic during our trip to Yosemite National Park (Yosemite Falls in the Distance). National Parks, Governments Museums are closed during shut down.

If you are visiting USA and were planning to go to Yellow Stone National Park, Yosemite National Park or any other national parks, you will have to change your plans.  Think about the tourist who came to USA by spending thousands of dollars? They can visit Empire State Building in New York, but can’t go to Statue of Liberty or Niagara Falls.

Majority of the students in USA attending college will not see any impact due to the shut down.

Sad Part : You still have to attend your classes, complete home work, projects, papers and thesis.

Just like Tourists visiting USA, if you decide to go on a trip to visit National Parks, then you will be disappointed.

OPT applications will be processed by USCIS.  Following message was posted in USCIS Website. USCIS is not affected by Government Shut Down. 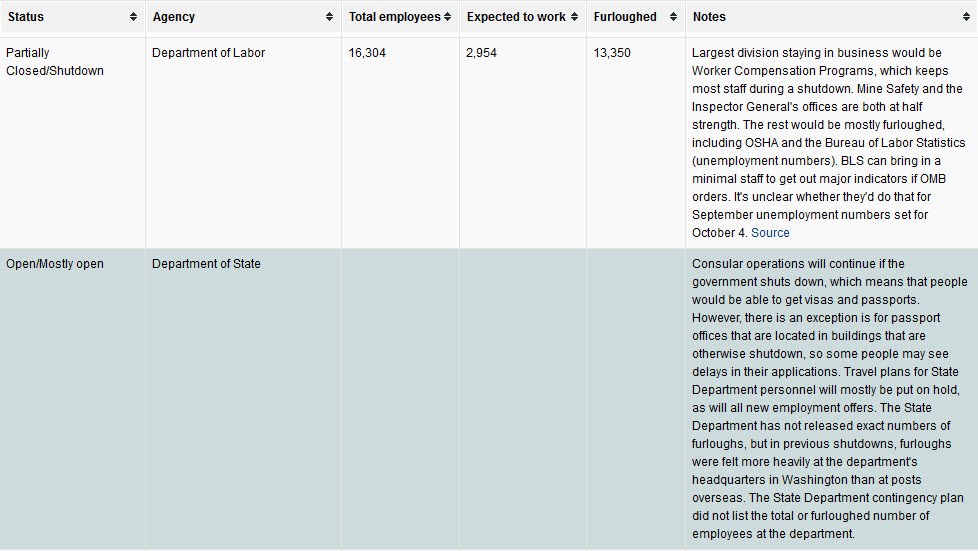 Folks who are applying for New H1B Application or other visa require LCA (Labor Condition Application) will be affected. As you can see in the above table, Department of Labor employees are furloughed.

I have got my petition approved, but not appeared for VISA stamping yet.Since there is a change in the location we have initiated petition transfer. I was told by my employer that my application is filed with iCERT. How will it affect my visa stamping and travel.

iCERT is systems are used to file LCA application. Due to shutdown, iCERT system is not available. Which means your employer have to wait till iCERT system becomes available.

I am moving to another employer and got my new LCA also one week back . They have started processing my H1b transfer and sent the Fedex to usics. fedex delivered to SAINT ALBANS, VT on 09/30/2013. Now I am waiting for Petition processing number. Will the shutdown effects my process. They are doing it in Premium processing .

In this scenario, LCA is approved and USCIS is processing the H1B Transfer application. USCIS offices are open and you will not be affected by this shut down.

Impact on 6th year H1B : This can affect some people who are in their 6th year of H1B, when PERM have to be filed to request 1 year H1B Extension.

Attending Visa Interview at US Embassy and Consulates

Department of State is not affected by Shut Down. This doesn’t change the way your Visa interview will be conducted or processed.

Refer to the above table’s Department of State which handles the Visa interviews and U.S. Passports.

What do u think might affect fall 201 or fall 2013 students if there is any .These sort of revelations do play a significant role in terms of their decision ..etc ,don’t they? ..I mean its not going to be permanent but still am afraid this will be a concern.

I don’t think Fall 2013 or Fall 2014 students have to worry about the shutdown. Your application package will be delivered via Fedex, DHL or USPS Mail services.

Do you have any other questions about U.S. Federal Government Shut Down or have it affected you in any way? Post your questions or share your experience in the comments section below.

Day 3 of Shut Down

If you want to understand why U.S. Government is shutdown, here is video from Jon Stewart. Jon is an American political satirist, writer, director, television host, actor, media critic, and stand-up comedian. He is widely known as host of The Daily Show, a satirical news program that airs on Comedy Central.

American Politics and constitution is different. Very different. It comes with freedom of speech.

Today is the Day 3 of the Shut Down and there is no resolution  insight.

Let me know if you have any questions or concerned about the shutdown in the comments section below.

Question from a reader

It’s very distressing as we have several students for 2014 who absolutely confused. What do i tell them any authentic link?lot many issues as bank loans and universities attitude involved too.

For authentic links refer to this article Day 1: Game Over : U.S. Government Shuts Down. Closed.

There are not many sources that cover the impact of Government Shut Down on International Students, F1 Visa, H1B Visa and other visa holders.  I’m sure many students planning to study in USA are worried about this shutdown.

Does this shutdown means that American economy is not good? I have applied for SPRING 2014 but I am a bit worried now after this news. Is it still worth studying in USA. Will there be any effect on the students to get jobs after graduation.

Here is my two cents on Government Shutdown:

Shut Down affects life of several people in USA. I don’t agree to shut down and holding entire country hostage because one party doesn’t agree to a law passed as per constitution (watch the video above).

Having said that, so far the impact on the economy is little to none.

Do you have to be worried?

Students getting ready for Spring 2014 and Fall 2014 can continue to make progress and preparations with  your visa, university application or test prep.

Refer to following article for more details on shutdown