In recent news conference President Obama made the following statement

[blockquote type=”left”]I suspect that on my flight back, this’ll be part of my reading, taking a look at some of the specifics that we’ve looked at,” Obama said. “And I’ll be making an announcement soon.” [/blockquote]

U.S. President Obama is planning to announce a series of legal immigration reforms via his Executive Power.

Here some of the expected executive actions include for legal immigration being considered.

The President of United States has an Executive Power that allows the passage of legislation that bypasses the U.S. Congress.

If you are new to United States political environment, government policies and how laws are implemented, you should read this article – How a Bill Becomes a Law in the USA.

Here’s a quick overview of  Bill to Law Process.

This process can sometimes be long, hard, and many bills doesn’t become a Law.

In the current state of american  politics of an election year, the U.S. House of Congress ( Controlled by Republicans) doesn’t want to bring the Comprehensive Immigration Reform Bill into a vote, which was already passed in the U.S. Senate.

So this means that there will be no Immigration Reform bill that will that could be passed via regular means.

However, the U.S. President has the executive power to pass a bill within his limits without going via the U.S. Senate and U.S. House.

He announced a few months back that he’s going to pass Executive Actions on Immigration Reform (legal and illegal immigration reform law).

Watch the video above about  this statement.

He gave a timeline of  “End of Summer”.  That’s about end of  first week of September.

This week and next week is going to be crucial for any immigration changes via Executive Order.

What components are discussed in the “Legal Highly-Skilled Immigration Reform”?

Most H-1B workers are aware of this rule.

You can follow the latest updated in the following links:

The public comment period for this proposed rule has ended in July and we are waiting for USCIS to publish the final or interim final rule. This requires additional 30- to 90-day review period.

This is going to be huge change and have major impact on  Green Card Wait Times.

Over the years, there is an estimated 250,000 Employment based Green Card visa numbers that weren’t used.

This would mean that both EB2 and EB3 will become current and could stay current for a few more years.

Current Dates Means folks with approved  PERM Laor approval and I-140 can file for I-485 and get Green Card within 1 year.

3. Count Only the Principal Applicants for Green Card

This provision is similar to H-1B and H4 visas. The annual 65,000 H-1B cap only counts the applicant for H-1B visa. This does not include their family members who might travel using H-1B worker visa to the U.S.

Whereas for Green Card visa numbers, if a principal applicant with a wife and 2 children applies for a Green Card, then a total of 4 Visas will be allocated from the total available cap.

So President Obama could use his executive power to change the rule to count only the Principal Applicants.  This would make a lot more Green Cards available to others in the queue.

If President Obama’s executive action will include either one of the provisions (#2 or #3), this would have a huge impact in lowering  the Green Card waiting time.

The H-1B Visa lottery is simply madness. Every year, there are 65,000 H-1B Visas available in the General Cap and another 20,000 in the Advanced Degree Cap. When more than 85,000 H-1B applications are received by USCIS, then random lottery selection method of applications is done to approve visas.

To address those concerns, there had been reports about

The H-1B Visa priority system would give higher priority for non-H-1B dependent employers to get H-1B visas when there is lottery.

Who are H-1B dependent employers?

A company with over 51 employees and 15% or more of employees are under H-1B status.

If this provision gets added to the Executive Order, then IT services companies (like Infosys, TCS, Wipro, etc.) will be affected.

Instead of having a priority system, how about finding “Active H-1B Usage Count” per employer for IT overseas services companies?

Keep this count rolling for the past 6 years.

So far there hasn’t been any official announcement from the White House on provisions that will be part of Executive Order to reform the Legal Immigration system – Green Card, H-1B Visa, H4 Visa, etc.

Other option wold be not returning the filing fee for applications. This would prevent employers from filing 1000’s with the hopes of getting more applications selected in the lottery.

People reading this will try to find out what reform piece will better benefit them.

At end of the day, America’s immigration System is broken. We need Immigration reforms in some form or another.

Stay tuned for more details if indeed President decided to use his Pen to sign executive order for Immigration Reform.

I am on H4 visa since 2007 and I have a MS degree in Microbiology from India(completed 2002). I have couple of years job experience in India. I have been taking courses in related field from a local community college during my stay in USA. What are the prospects if I want to apply for…

I just completed a Facebook Live video to discuss the impact of the new memo from USCIS about “an entry-level computer programmer position would not generally qualify as a position in a specialty occupation making it ineligible for H-1B Visa”. We are going to discuss three  four latest news here: Computer Programmer Job Title vs H1B…

Following post was shared by Varad. Date: 23/5/2012 Time: 7:45 AM Course: BS in journalism and mass communication University: Iowa State University Result: Approved. Scholarship: $7000 Profile: SAT score: 1880 TOEFL: 102 Awaiting results for Std.12. I had my visa interview on 23rd May at US Consulate, Mumbai. I reached the consulate at 6:45 AM….

This is how my interview went on 12th May in Hyderabad consulate, me – Good morning.. v.o – Good morning V.O – What is the purpose of your visit to US? me – To pursue Master of Business Administration VO -What is your Gmat score? me – I don’t have a gmat score but i… 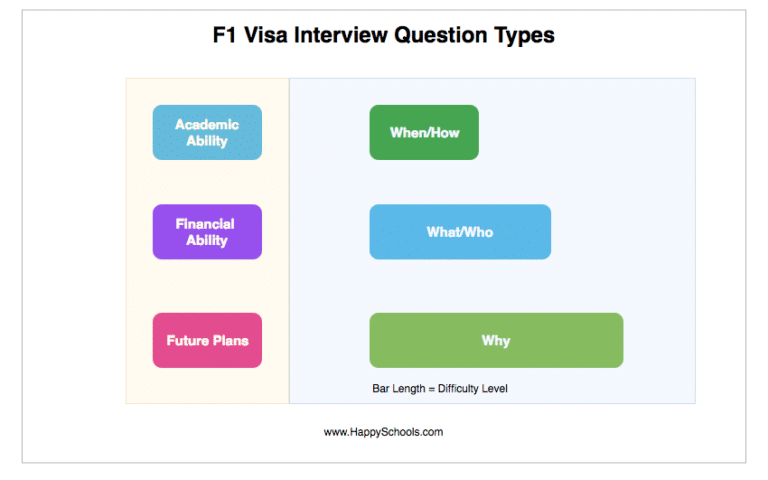 Are you looking for a long list of F1 Visa Interview Questions? Is a list of questions good enough to get the F1 Visa Issued? You need to know how to answer them. Right? And you need to make sure your answers would convince the Visa Officer. You have come to the right place. Not…

Applicants applying for the US visa are required to submit the DS-160 online application form. For first time applicants, it may take over two hours to complete and submit the information. It’s possible you may not have all the required information with you at the time of filling the form. And it’s possible for applicants…