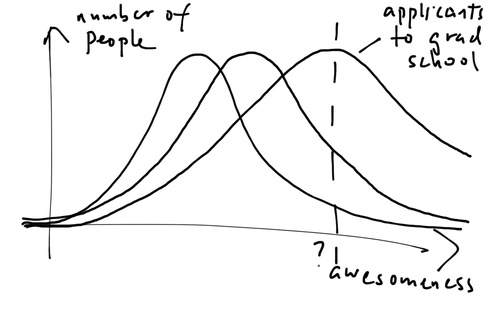 Do you want to know the real difference between studying in top Ranked vs Low Ranked Universities?

Kaicheng Liang, second year Ph.D. student at M.I.T, posted the following answer in Quora.
I consider this to be probably the best, damn good explanation for differences between studying in Top Ranked Universities and low ranked universities.

Actual question: As an engineering student from an Ivy League school, will I be at a disadvantage in graduate admissions compared to students from schools with higher-ranked engineering programs?

I assume that ‘an Ivy League school’ in this context means ‘a lower-ranked engineering school.’ Apologies for being direct. Let me answer this question in a way that will be most useful to you, where ‘most useful’ does not necessarily mean ‘most encouraging’ or ‘most comforting.’

I’ve been called out on Quora before for being overly negative in my admissions-related answers, but increasingly I’ve come to believe strongly in the Chinese proverb “The best medicine is bitter to swallow but good for the illness.”

The answer to your question is Yes, you are at a disadvantage coming from a lower-ranked engineering school. A lot of people will be howling their disagreement at this point.

Also, most professors will tell you that admissions committees look at your research, your letters of recommendation, your coursework, your statement of purpose, and that the last thing on their minds is the ranking of your school.

Even the concept of rankings is widely ridiculed, even reviled. It has become the norm to discount rankings as just manipulative marketing.

Even with rankings computed by reputed agencies that use a plethora of metrics, there are endless categories and subcategories such that there is a number one for everyone.

There is a nebulous idea that rankings mean something, but it is difficult to appreciate what they mean to a student or a prospective applicant. Excellence

I have found that a useful way to appreciate rankings, especially on graduate admissions, is that higher-ranked schools have a higher standard of what is considered to be than lower-ranked schools.

Let me try to illustrate what I mean with these drawings that I scratched out on my iPad. Sorry about how they look. This is a plot of a number of people versus awesomeness, at your undergrad institution. As you would expect, it is a typical Gaussian ‘bell’ curve. Nothing surprising here. 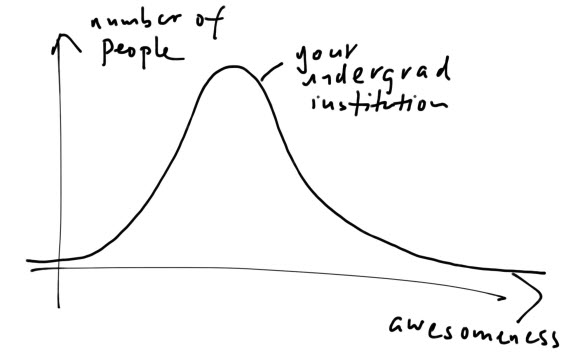 The new curve in the following plot represents the same Gaussian but for a higher-ranked school. 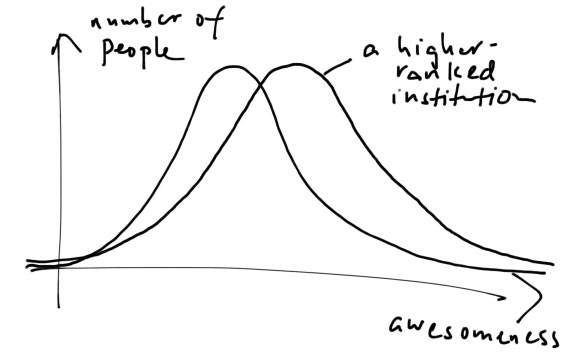 My argument is that the Gaussian is simply shifted to the right. Are you precluded from the highest levels of awesomeness simply because your school is lower-ranked? No, because the Gaussian extends infinitely long. 5 Advantages in Single Line

The new curve in the following plot represents the Gaussian for applicants to graduate school. People who apply to graduate school are better-performing and more motivated, and a mix of the best of all undergrad institutions. 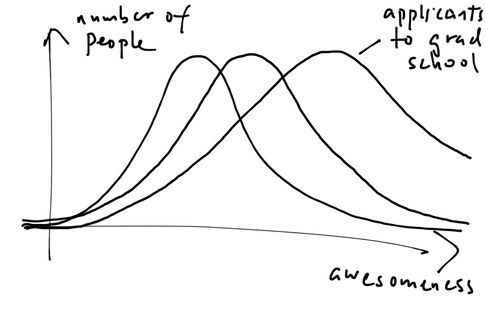 What matters isn’t how awesome your school is. What matters is, how awesome are you? Let’s consider a couple of cases. If you were on the dotted line in the following plot, you were average in school, but would be strict below average at a higher-ranked school, and pretty much bottom of the graduate school applicant pile. 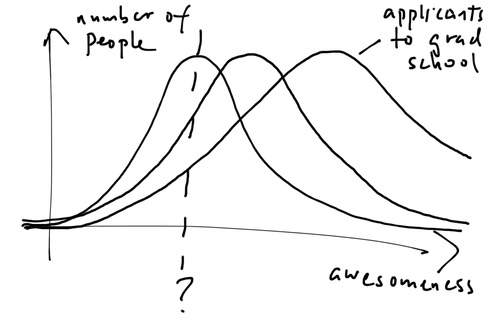 If you were on the dotted line here, you were a genius in school, but then you would be just quite smart at a higher-ranked school, and average in the applicant pile.

There is a disadvantage, but it isn’t from the admissions process – obviously nobody is going to judge you simply on where you’re from. The disadvantage is that your school and your peers have left you comfortable with a relatively low standard of excellence.

What you think is great, others think meh. And this is a crippling disadvantage in your personal growth and training, which severely affect your prospects either in the workforce or graduate school.

A graduate admissions committee isn’t going to pick students because they are from the highest-ranked engineering schools, but it is going to pick the best engineers.

And the best engineers, not all, but most, come from the highest-ranked schools.

So here’s the plan: you should know that the ranking of your school doesn’t disadvantage you directly in the process, but you should also be starkly aware that you probably aren’t as good an engineer or graduate school applicant as you think you are, even if you are valedictorian.

You who studies diligently and understands fully the fundamental concepts from coursework, you who works tirelessly in the lab after class, you who learns earnestly from your research advisor and graduate student mentors, you who fights for the second author or even the first author on one or even two or three research publications.

For every success you achieve, remind yourself that there are 10 or 100 or 1,000 or 10,000 undergrads out there who have achieved more and have stopped congratulating themselves and gone back to work. If you can do that, then you are at no disadvantage.

Are you in Low Ranked University?

Now, you may ask, I’m studying in low ranked university, what can I do to improve my Awesomeness?

I explain few things you can do if you an in low ranked school at – Advantages of Attending High Ranked University.

Praveen asks: How long does it take for grad schools to generally respond to packets and inform applicants if the admit is given / rejected / wait-listed? Also, let’s say if I have get an admit in 1 particular university, can I request or buy for more time from that university in order to wait for…

A Crash Course on Decision making about Studying Abroad by Priyank Shrivastava in response to 3 Options After MS in USA – Job, Studies or Go Home.   Phew..This one has really heated up… I would rather say that one should not deviate from the decision one takes about higher education in a foreign land….

Here are some interesting questions about financial documents I am applying for the fall semester for a PhD course in pharmaceuticals. I am currently in the last semester of my bachelor’s in pharmacy. I have taken my GRE and my scores are Q = 740, V = 520, A = 4. I’m taking my TOEFL this… 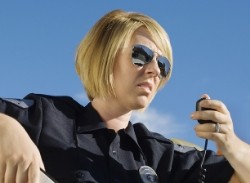 I created this short video to answer 4 questions about Crime, college campus safety  while studying in USA and bunch or other questions about managing academics in US Universities. Here is the actual question from a Parent : Greetings,  Your mails are very informative,keep doing the good job & accept my sincere thanks for the…

I’m a student of Pharmacy (B.Pharm). I am very much interested in pursuing my higher studies in US or Canada. But i am a patient of Hepatitis B as Chronic Inactive Carrier having HBsAg test Positive (+ve) only, and, HBeAg & HBV-DNA tests are Negative (-ve). Am i eligible to get the VISA and Admission…