Here is a comment from a reader. His passport doesn’t have a Surname ( or Family Name). Got FNU in US Visa.

I understand that last name is very important in the U.S.A. I don’t have a surname in my passport. Surname field is blank. My given name is Nived XXXXX. So wherever I had to submit my last name, I printed it as XXXXXX.

I received an I-20 from UTD. I had mailed them a copy of my passport. Understanding that I don’t have a surname, they printed Nived XXXXX as my surname and left my first name field blank.

International Office at UTD explained that this is the procedure they follow for candidates without surname in passport. They claim no problems have been reported yet from previous students.

I understand that VISA application form, I-94, US custom’s form etc asks for Family name and First(given) name. Please advise me on how to fill these.

If you apply for U.S. Visa without Surname in the Passport, they will issue U.S. Visa, but your first name will be used for the Last Name field in the Visa. Your U.S. Visa would look like this. 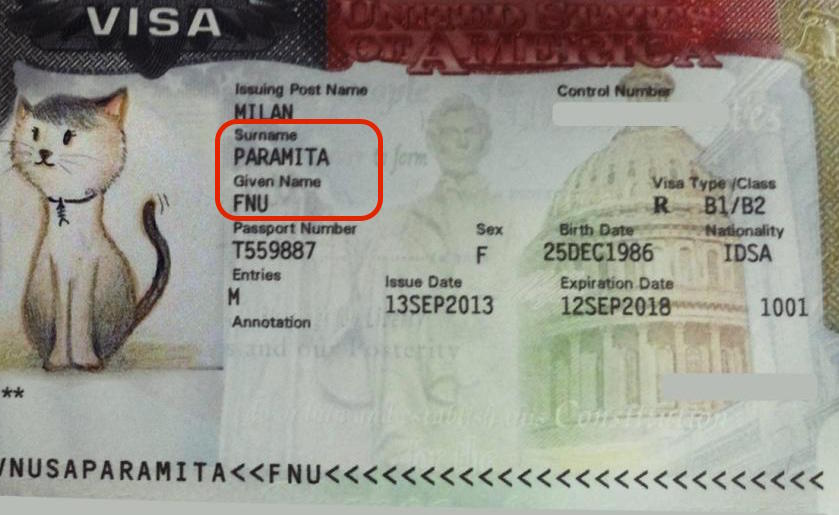 The solution for FNU in US Visa

If you have read the related articles here in the blog, you will know by now that you can get U.S, Visa without last name in your passport. But, you will run into several of problems without Surname in your Visa and the Passport.

Everything, including SSN to Drivers License, will be difficult to get. Read the following experience posted by a reader:

The time and effort you have to put to change your passport changed to include the Surname could save you lot of hassle in the future.

Warning: Changing your last name after coming to the U.S. will be more troublesome and expensive process.

Read the steps to change the name in the Indian Passport here in the USA.

Blank Surname in the Passport

I have posted several articles explaining the importance of having Surname in your passport even before take GRE Exam.

I came across the following experience posted by someone in a forum who had FNU in US visa and this process he had to go through to get it fixed. If you are a student, going through this process will be time-consuming and costly.

Steps to change the Name in Passport in US

Rules are strictly followed here. Only thing we need to wait for a long time.. This is what I did to correct my name everywhere

The whole process took about Ten months time (purchased the car in December 2005 only after correcting my name in all the documents).

Question: What will happen to U.S. Visa Stamping in the Passport after legally changing the name?

You can continue to use the visa stamping with FNU in your canceled Passport. The name in your USA Visa stamp can only be changed in a U.S. Consulate or Embassy. When you travel next time, you can get a new Visa stamping in your passport. You don’t have to attend a Visa Interview for requesting this name change.

Folks posting comments at F1 Visa Rejected 3 Times due to Insufficient Funds are posting following comments Nirmal I agree that some of the questions could have been answered better but isn’t a student loan for 14.5 lakh and the assets mentioned not sufficient to get a visa? I don’t know the tuition fee for…

I had my F-1 Interview on May XX, 2011 for Georgia State University (GSU) for MSIS program. Luck really played a hard ball with me. Please help. I am sharing my F1 Visa to USA Interview experience please help so that I can learn about it from different perspectives. F1 Visa Interview VO: Good Morning!…

Latest Update from Obama – Big changes announced for High Skilled Legal Immigration. ( Nov 20, 2014)   In recent news conference President Obama made the following statement [blockquote type=”left”]I suspect that on my flight back, this’ll be part of my reading, taking a look at some of the specifics that we’ve looked at,” Obama…